We were in the Alligator River on November 8th heading towards Belhaven and the temperature was rising on the engine gauges. We added water and continued at low RPM. We then noticed a drop in oil pressure, at which time we shut the engine down and checked the oil level, it was low. When we checked the engine oil level in the morning before we left it was normal.   We added oil and noticed some milky sludge around the fill cap and also found the coolant level was low again, at which time we decided to stop running the engine and call for a tow from Boat US. Belhaven Tow Boat US towed us to Hobucken and left us at the fish dock for the night (great service). The next morning Oriental Tow Boat US indicated that they could not tow us to the next district due to weather conditions but could tow us to the Neuse River where we could sail to Adams Creek where the Beaufort Tow Boat US could pick us up. The wind was blowing 25 mph and we cannot say enough positive things about the Oriental tow service. In Adams Creek the Beaufort Tow Boat service picked us up and brought us to Town Creek Marina which is a certified Yanmar dealer. Looking on the internet for Yanmar engine service we thought this was our best option.

We looked for obvious signs of leakage at the marina but could not find any.  We did a compression test and all four cylinders were in spec, so we removed the head and heat exchanger (you can see a milky substance on head where water was mixing with oil.  Both the heat exchanger and head looked OK once removed.  This left us with two possibilities – cracked head or cracked block.  If we sent the head out for repair and everything looked OK then we would have to put the engine back together to to check for a cracked block.  If it turned out the block was cracked then we would have spent thousands of dollars on a trashed engine.

This is where things get interesting.  Sitting in the marina store was an exact replacement engine that would almost drop in Nomad with little modification.  The engine was ‘nearly new’ with only 300 hours on it.  Rather than continue to drop thousands of dollars on  a twenty plus year old motor with 4,500 hours on it we decided to bite the bullet and replace the engine. 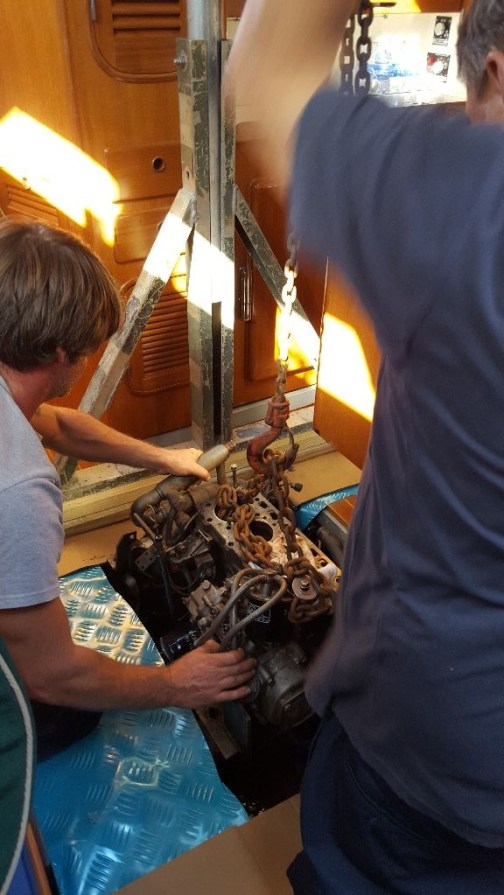 Dead motor waiting to be lifted out through hatch 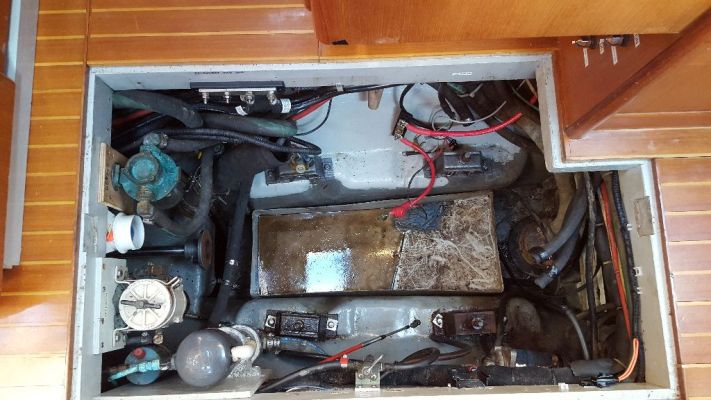 New engine Betsy found sitting at marina store – as fate would have it, and exact match for our deceased one. 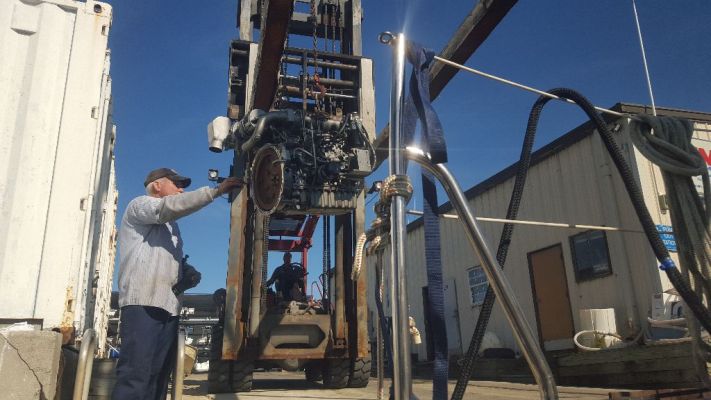 New engine being lowered through large hatch in front of mast 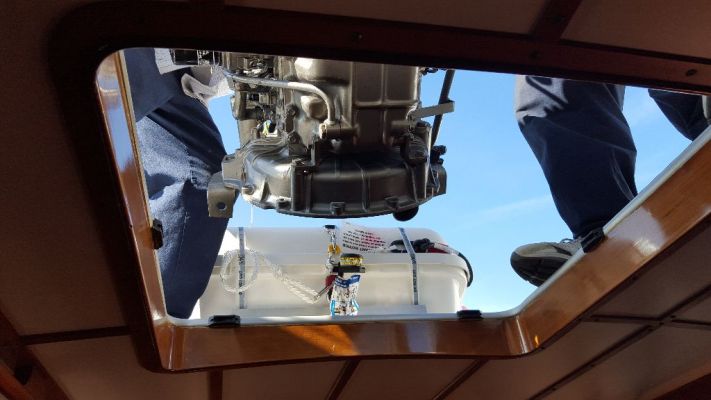 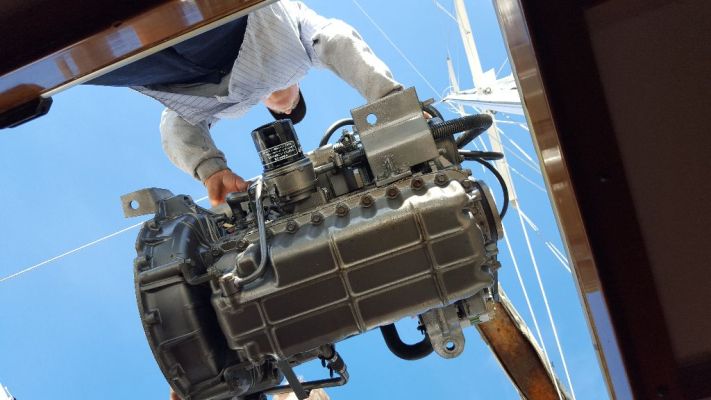 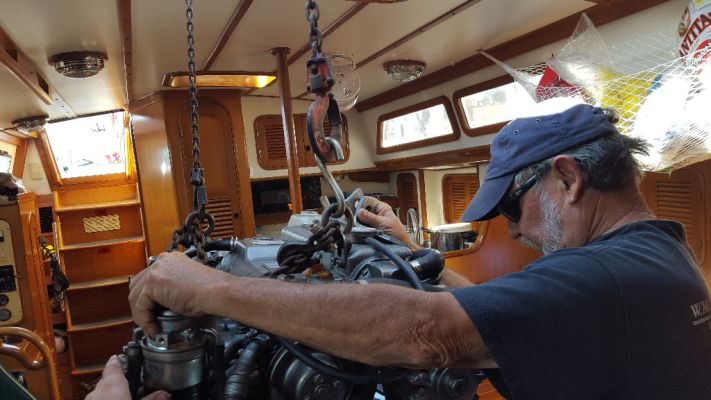 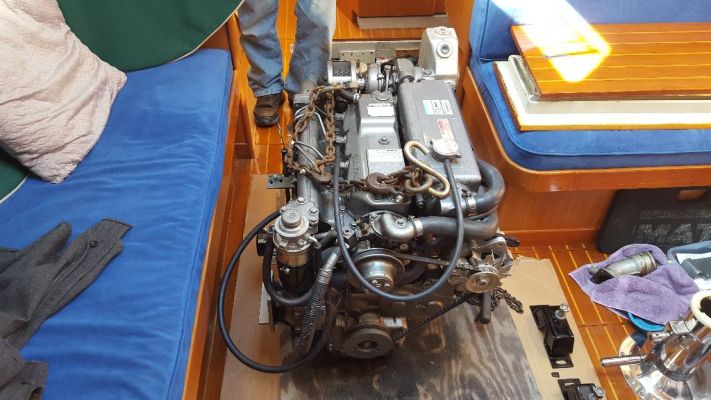 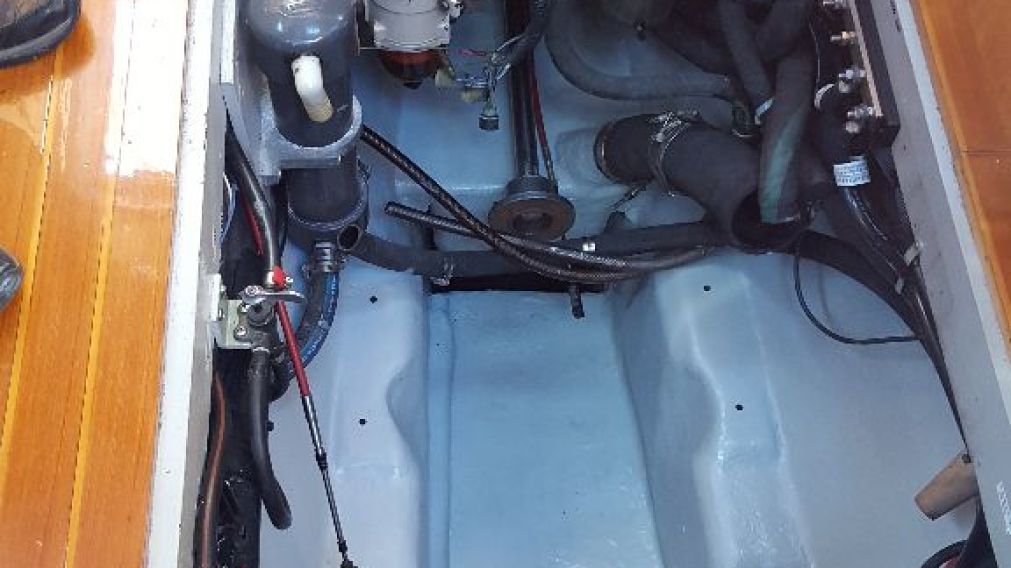 New engine back in place 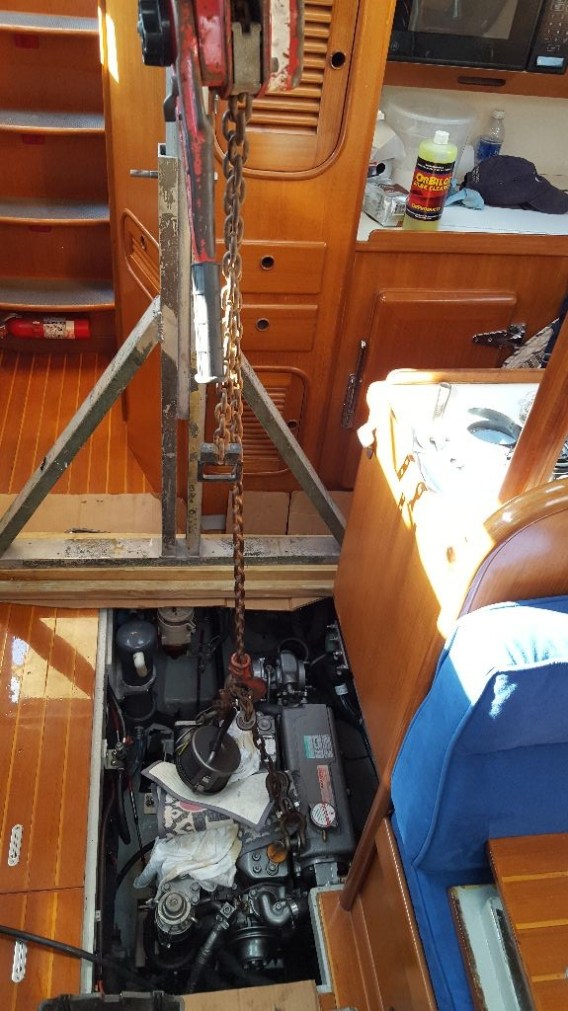 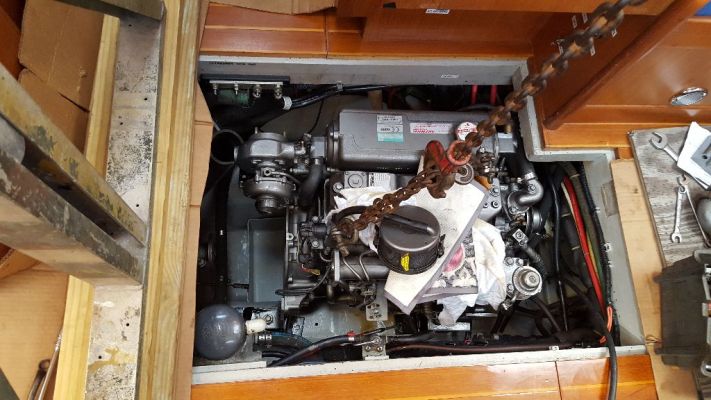 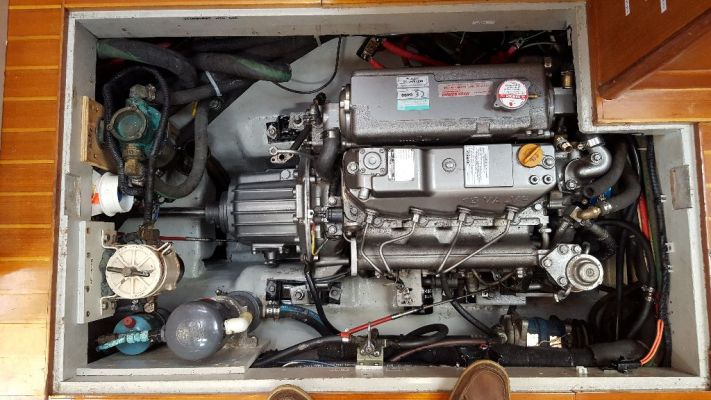 Technical details – – – we have a Sea Frost compressor that allows the engine to cool the freezer and it takes the place of one engine mount.  To run the new engine’s cooling hose we needed to cut a hole for the hose to pass through the Sea Frost mounting plate and drill another hole for an engine bolt to pass through. 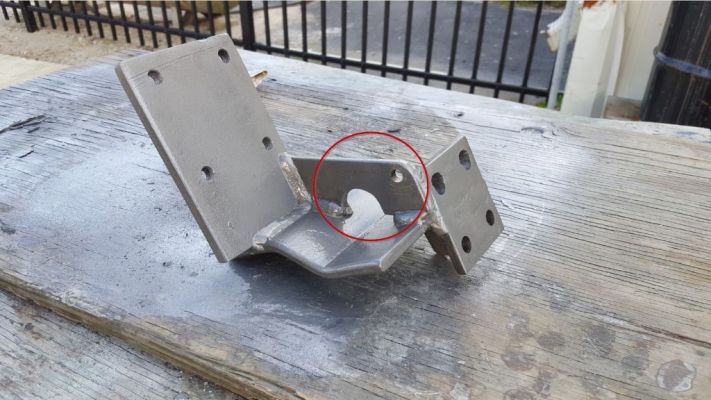 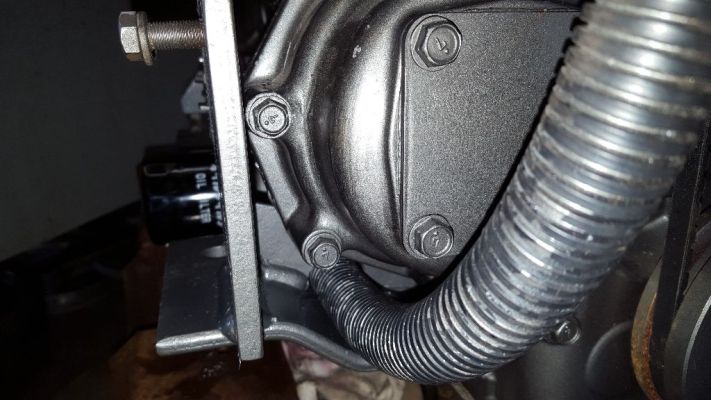 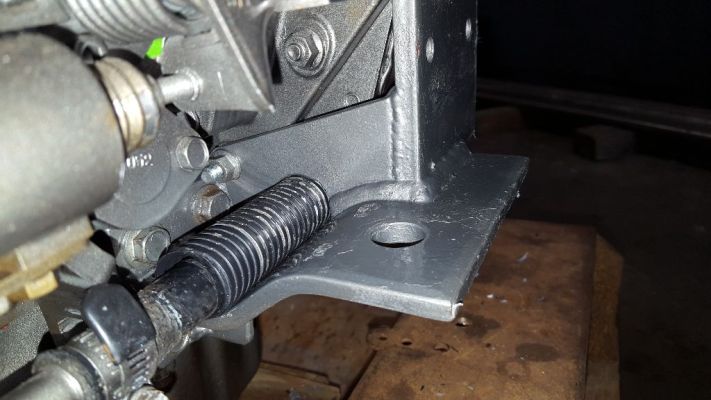 The new Yanmar 4JH4-TE is taller than the old 4JH2E.  This required getting a sawzall and cutting the corner down so the cooling hoses had enough clearance.  The center support board also needed to be ‘notched’ to clear various engine pieces.

The height of the new engine also required cutting into the insulation and notching one of the floorboards.

With the increase in horse power we needed to increase the pitch in the prop . . . which meant having a diver remove the prop and sending it to a prop shop .

If you are in Beaufort NC and need prop work we highly recommend Big Rock Propellers. 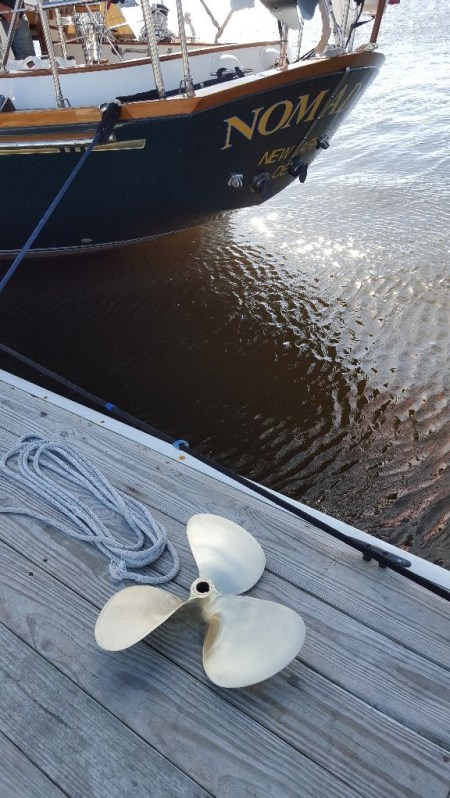 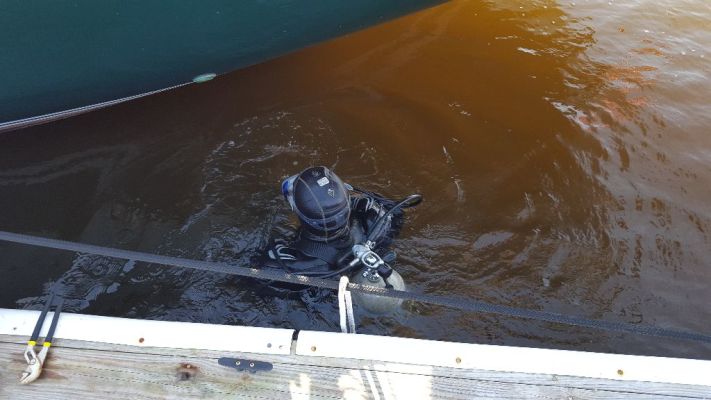